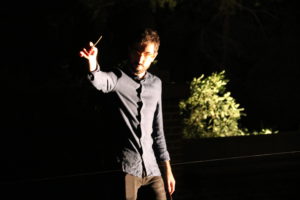 Víctor Barceló (1991) is a percussionist from the Canary Islands who has focused his work on experimenting with different concert formats and the use of multimedia to create experiences that go beyond the level of acoustics. His music is heavily influenced by techno, free jazz and noise.

He is a member of ensembleThis|ensembleThat , duo Around the Corner and neuverBand. From 2014-2016 he was percussion teacher at the Conservatorio Superior de Música de Canarias and since 2019 he teaches at the Winterthur Conservatory.